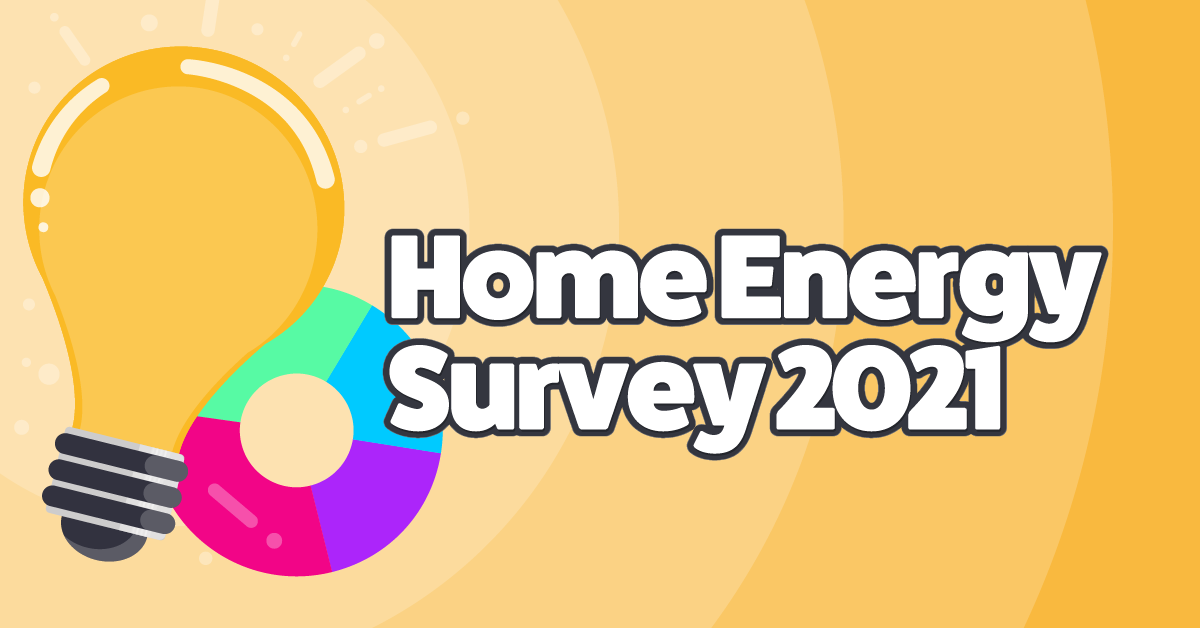 Lockdown impacts and a move to greener energy: what we found out from our Home Energy Survey 2021

In April we carried out our first Home Energy Survey to find out about the energy habits and concerns of people in Northern Ireland. In particular, we wanted to know whether lockdown and restrictions stretching back to last year, have impacted on families use of energy in the home, energy bills and what they would like to see in terms of energy deals and support.

Over 700 of you responded to our survey and have allowed us to make the following findings:

Northern Ireland has dipped in and out of various degrees of lockdown over the past year with many of us working from kitchen tables, home offices and under the cover of our duvets. And it is not only working from home….home schooling has become the new normal with children swapping classrooms for Google Teams. In fact, half of our respondents have been working at home since lockdown, and a similar proportion had children or other dependents at home, too.

Naturally, we’re using more energy within the home, whether it is during the workday charging laptops or plugging in printers, or in our down time, swapping cinema trips for home movies – but how many of us have noticed this increase on our bills?

We asked our respondents whether they had seen an increase in their bills since March 2020 when lockdown started and found that this was true for almost 84% of them. 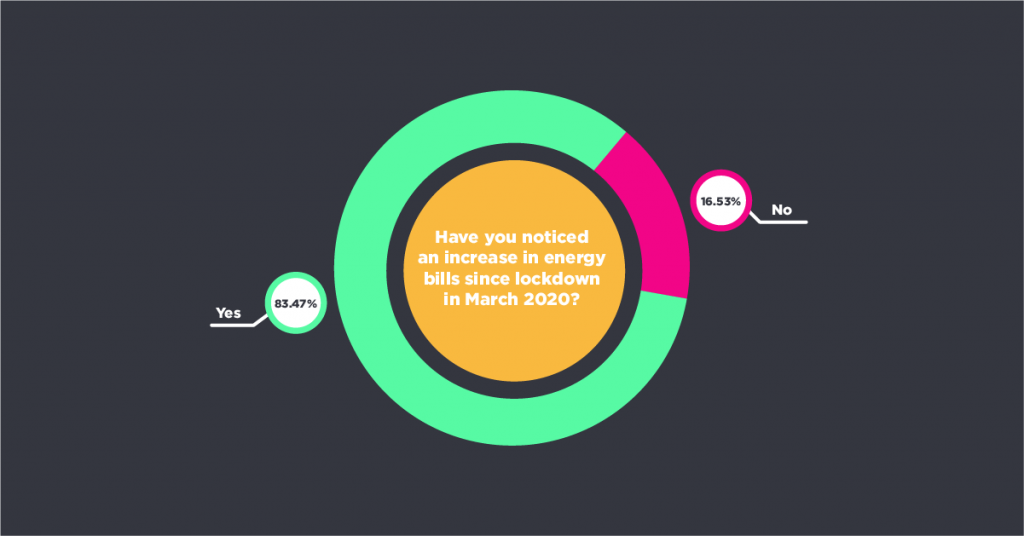 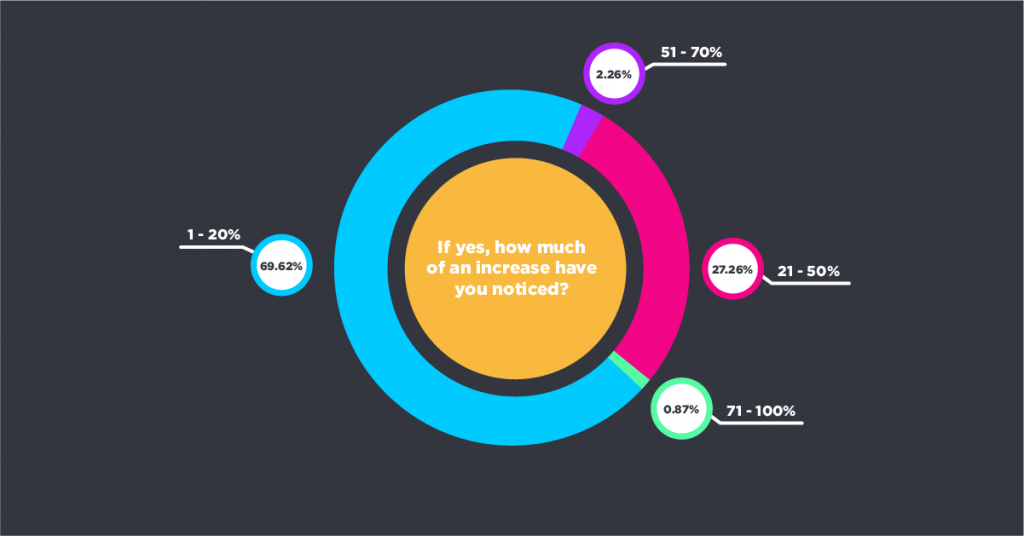 More worryingly, a quarter of people have found it more difficult to cover these increased energy bills over the last year. This struggle to keep up with energy bills is a key concern as 21% of households in Northern Ireland already live in fuel poverty. 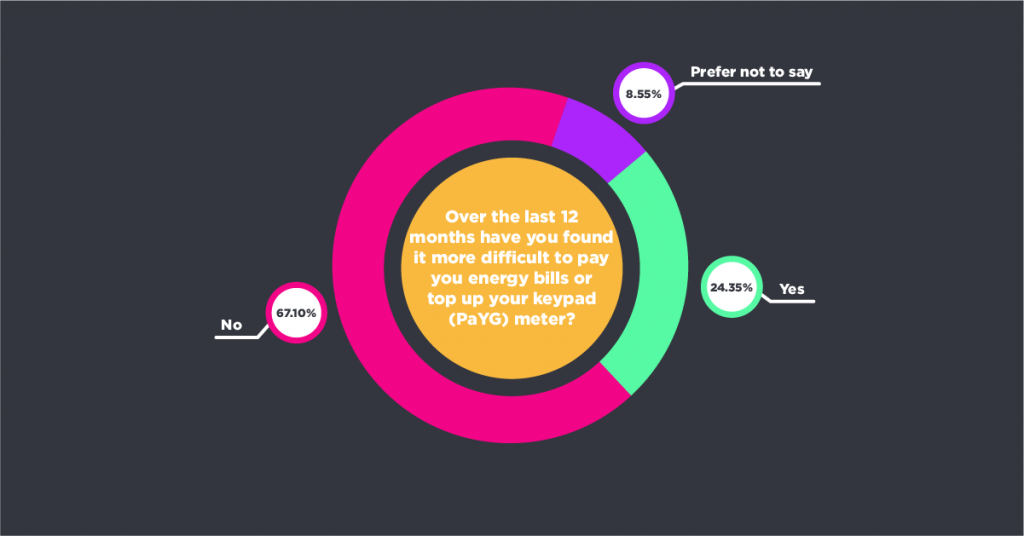 And the bad news is that energy prices have been going up – since the start of 2021 home heating oil has increased by around 10%. In recent months several electricity suppliers have also pushed up prices or removed their most competitive discount deals. And across March and April we saw significant hikes of between 9.8% to 17.7% to gas prices in Northern Ireland 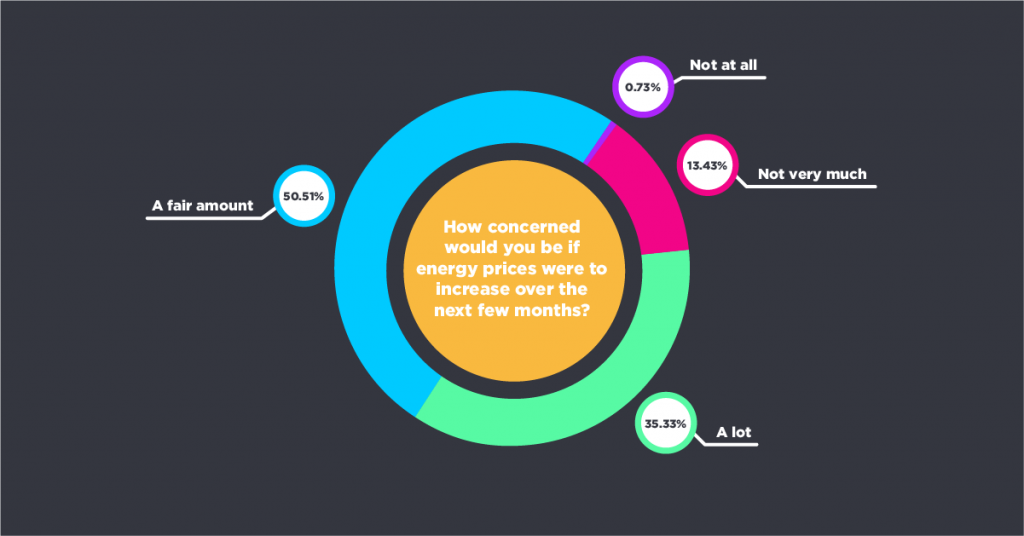 If you are interested in ways to cut back on these bills, we would recommend our blog on saving energy while working from home.

Now, with this jump in energy bills, are more people switching?

Half of respondents had switched but this had been more than one year ago. Around 3 in 10 people had switched between 1-3 years ago, and a further 2 in 10 people switched over 3 years ago. And this is a really common response – often when people switch once they sit back and relax and think job done! However, many new deals come with a 1 year discount period, so after that first year it’s likely you will be moved to the supplier’s more expensive standard rate. So the message is…if you have never switched, switch, and if it’s been a while, switch again!

Our survey also revealed what people look for when they do switch.

Price will always be a key consideration, which likely explains why the main thing a person looks for is a discount on the tariff for a fixed period. But what else matters when people are looking for a new deal?

We would always recommend using Power to Switch so that you can compare all deals, tariffs and offers across all suppliers to find the one which suits your needs best. 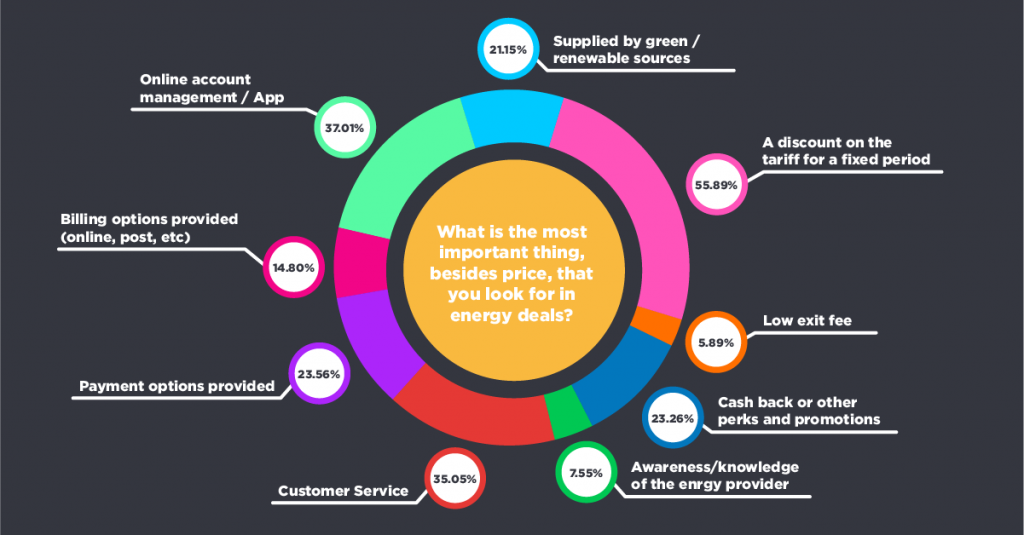 Switching to greener options also appears to be on our respondents’ minds. We asked our respondents about what they were most interested in renewable sources for their home energy, and almost 6 in 10 answered that they were. This probably reflects that many of us are now more concerned about climate change and taking action to reduce our carbon footprint and impact on the environment. 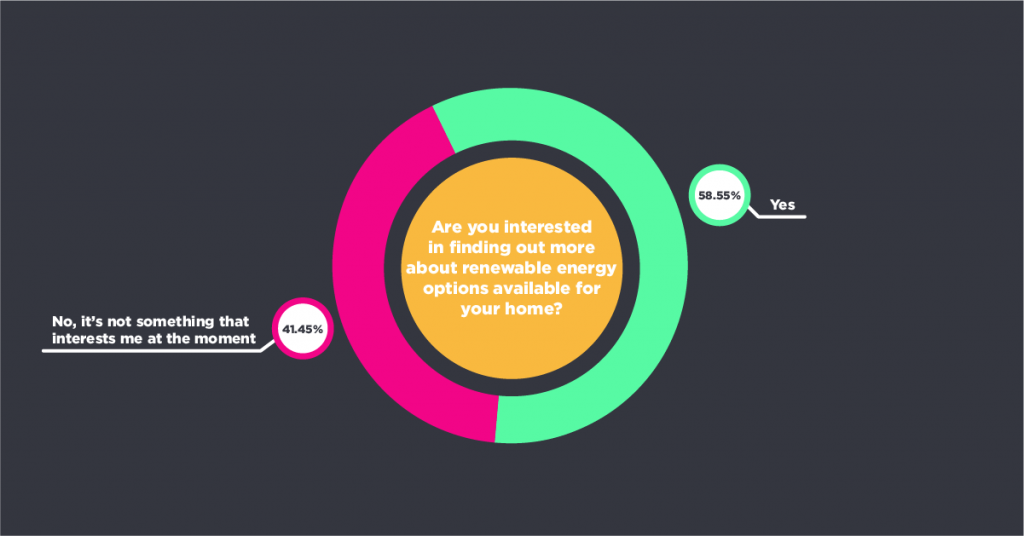 Green energy has also been a particular success story in Northern Ireland with almost 48% of our electricity being powered by renewables over the last year which may have helped increase interest in this issue.

The majority of our respondents wanted to know more about renewable energy options in Northern Ireland, specifically solar panels for electricity (36%) and green energy tariffs (29%). In terms of green tariffs, choice for consumers is beginning to improve with a more suppliers offering this option for their customers. So it is already possible to choose an electricity tariff for your home powered by 100% renewables. 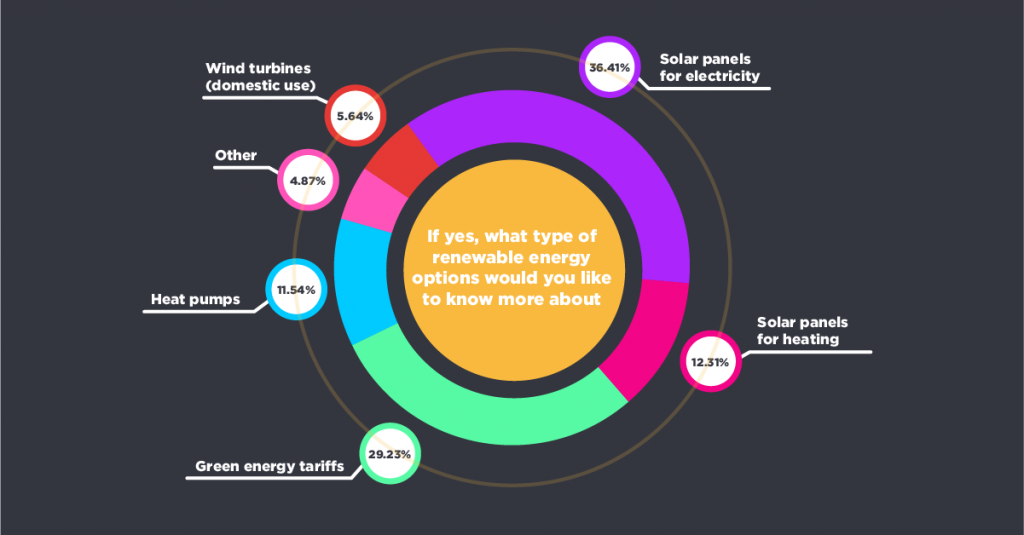 There are a wide range of things people would like to see in the Northern Ireland energy market. Top of the list (27%) is a desire for renewable energy grants to support with the cost of installing energy equipment and helping to make homes warmer and more energy efficient. 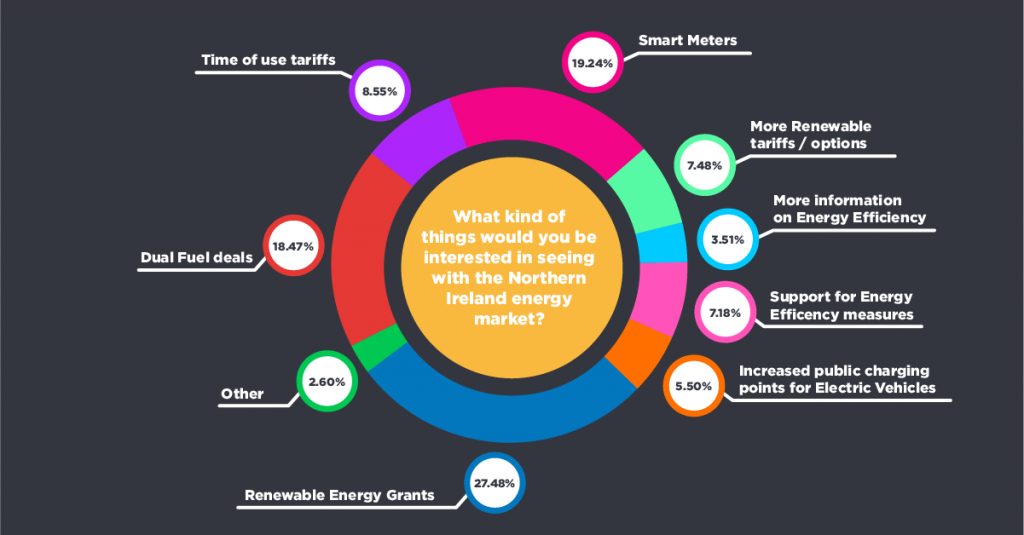 Around a fifth of people expressed an interest in Smart Meters which may reflect developments in other energy markets. In GB and the Republic of Ireland Smart Meters are being rolled out which aim to support people to take more control of their home energy use. Smart meters also allow suppliers to offer ‘Time of Use’ tariffs which means they can provide multiple tariff rates throughout the day which can help encourage people to use when electricity is cheaper to supply (e.g. nighttime or weekends).

There is also interest in Dual Fuel deals (18%) which are common in other energy markets but not yet a feature in Northern Ireland. Simply, dual fuel energy is whenever you receive both your gas and electricity from one supplier.

In conclusion, this survey has lent some light to various issues surrounding the topic of energy in Northern Ireland. We hope that such findings will inform and influence the future of the energy sector here in Northern Ireland, for a better future for customers.

If you have any questions about our survey, please don’t hesitate to get in touch via hello@powertoswitch.co.uk, Facebook or Twitter. 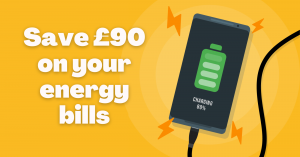 Want to save £90? Start by switching off your home appliances

Most of us have heard of “vampire devices”. These are the appliances in our home, 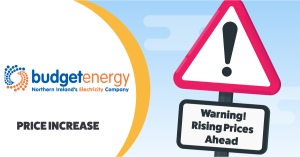 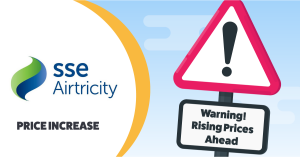 SSE Airtricity has announced their first price rise for electricity customers this year. Prices will 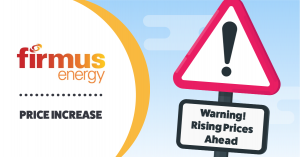 Firmus energy to increase prices in Greater Belfast by 37%